Memorial of St. Agnes of Rome

Homily for the Memorial of St. Agnes of Rome

St. Agnes is one of several virgin martyrs with similar stories: A young girl finds Jesus and vows virginity.  A pagan wants to marry her but she refuses. The girl is tortured, dies and goes straight to heaven. To be raised as a Christian when appalling waves of violence were sweeping across the Roman Empire was as life threatening as being a Jew in Germany during the early 1940’s.  At twelve years old her vow of virginity put St. Agnes on a collision course with the values of a pagan empire. 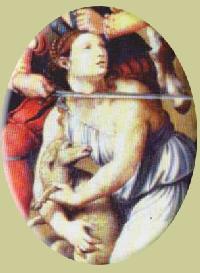 One day when she was returning home, St. Agnes was met by the governor’s son. He was passionately attracted to her and tried to win her favor with diamonds if she would marry him.  St. Agnes refused, saying: “I have already found another lover.”  Rebuffed, he fell sick, so his powerful father tried to intercede for him, but Agnes replied that she would not break faith with her bridegroom. Then the governor tried to frighten her with threats of consignment to a house of prostitution. She still refused. So he paraded her naked through the streets of Rome to a public brothel.  There she was surrounded by a bright light that struck fear in the hearts of those who tried to have their way with her.  When she was condemned to die by fire the flames did not harm her.  Finally, she died when they cut her throat.  Forty years later the daughter of Emperor Constantine was cured of illness after praying to St. Agnes.  In gratitude, she built a basilica over the tomb in honor of the saint.

At the Toronto World Youth Day in 2002, Pope John Paul II suggested saints who died young to be role models, like St. Agnes, St. Therese of Lisieux, St. Kateri Tekakwitha, St. Maria Goretti and St. Josephine Bakhita.  But instead of chastity and love of God, a secular legend has preempted the feast of St. Agnes.  It claims that a young girl will see her future husband in a dream on the eve of the feast if she goes to bed with this prayer on her lips: “Agnes sweet and Agnes fair, hither, hither, now repair; Bonny Agnes, let me see, the lad who is to marry me.”  Or, this shorter version: “Fair St Agnes play thy part, send to me my own sweetheart.”

Today, chaste Christian marriages and respect for life, virginity and martyrdom, are colliding with the values of our increasingly secular, atheistic culture.  Terrible, appalling waves of immorality and violence against life are sweeping over every country.  But let us not lose hope.  When young St. Agnes was martyred in the year 303, the dark persecution of Christians under Emperor Diocletian seemed endless.  But only ten years later the conversion of Emperor Constantine marked the beginning of the Christian Roman Empire.  May the darkness that has enveloped our world today once again be dispelled, especially by young people, like St. Agnes, embracing love of God and Christianity.