Memorial of St. Ignatius of Antioch

Homily for the Memorial of St. Ignatius of Antioch

The martyrs are heroes, and St. Ignatius, the third bishop of Antioch in Syria, is a giant among all martyrs.  In the year 107 he came face to face with Emperor Trajan who condemned Ignatius to be devoured by lions in the Colosseum.  The very name of today’s saint describes him well: Ignatius, the fiery one, who ignited Christians with his fervent love for Christ. 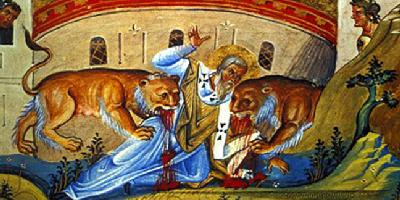 Never before or since has a martyr given such a powerful witness to Christ.  He writes, “I would rather die for Christ than rule the whole earth. … Christianity is greatest when it is hated by the world. … I don’t want merely to be called a Christian, but to actually be one.  Yes, if I prove to be one, then I can have the name.  Now I begin to be a disciple. Let fire and cross, wild beasts and tearing, let breaking and dislocation of bones; let cutting off of members and shattering of the whole body; let all the dreadful torments of the devil come upon me so long as I attain to Jesus Christ.”

His journey from Syria to Rome guarded by ten soldiers was more like a triumphant march than a walk to death.  He writes to Christians along the way, “I am dying willingly for God’s sake, if only you do not prevent it. I beg you, do not do me an untimely kindness. Allow me to be eaten by the beasts, which are my way of reaching to God. I am God’s wheat, and I am to be ground by the teeth of wild beasts, so that I may become the pure bread of Christ.”  Christian communities flocked to meet him everywhere, hailing and encouraging him on his way.  May the prayers and example of St. Ignatius also ignite us so that we will be on fire with love for Christ.

Memorial of St. Ignatius of Antioch 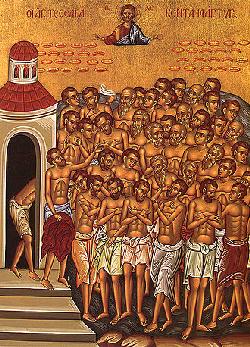 Why does the crucifixion of Jesus save us? Why isn't it the worst sin ever committed?

It is the worst sin. In the Catholic Catechism we read, “[The crucifixion is] the greatest moral evil ever committed, the rejection and murder of God's only Son, caused by the sins of all people…” (#312). Then why doesn't it condemn us rather than save us? How can the worst sin every committed save us?

Listen to this story. According to St. Basil, forty Roman soldiers who had openly confessed themselves to be Christians were condemned to be exposed naked upon a frozen lake on a bitterly cold night, so that they would freeze to death. Other soldiers kept guard to prevent anyone from escaping. One of the Christians yielded and, leaving his companions, sought the warm baths which had been prepared for those who renounced their faith. Seeing the faith of the other thirty-nine Christians, one guard was inspired by grace to throw off his own garments and join them as they died on the ice. He became a martyr rather than a persecutor by dying with them. (The Forty Martyrs of Sebaste).

So it is with us. The crucifixion of Jesus saves us when we join Christ on the cross, and die with him. As St. Ignatius of Antioch writes, “I am the wheat of God, let me be ground by the teeth of the wild beasts, that I may be found the pure bread of Christ. … Then shall I truly be called a Christian, a disciple of Christ.” (Letter of St. Ignatius to the Romans). If we die with him every day, we will live with him for eternity.