Homily for the Memorial of St. Jerome

If you were to visit the Detroit Institute of Arts you would see a 15th century painting of St. Jerome removing a thorn from the paw of a lion.   It’s based on the life of St. Jerome narrated in one of the earliest collections of Lives of the Saints, The Golden Legend, written around the year 1260. 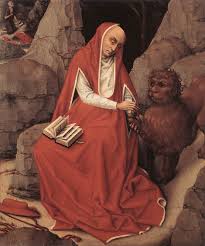 It happened at a little monastery in Bethlehem where St. Jerome lived as a monk, translating the Scriptures into Latin so the common people could read the bible in their own language, the Vulgate. The Legend begins with a lion entering the monastery courtyard. All the monks fled for safety except Jerome. The dreadful lion slowly moved toward him and then lifted up its paw.  Jerome saw a large thorn buried in its flesh.  Taking a tweezers, he removed the thorn, cleaned the wound and wrapped the lion’s paw with a linen bandage.  Forever grateful, the lion remained, becoming a friend to the monks and a guardian of the monastery.

The story was not new even in the Middle Ages.  Aesop’s Fables has a similar tale, and it’s told again in myths from ancient Egypt and Iceland.  So, what moral can we take with us from this story repeated in the life of St. Jerome? Perhaps this: No act of kindness to friend or foe is ever wasted.