St. Pachomius began as a hermit but ended as a cenobite, the founder of eleven monasteries, nine for men and two for women. Of all the monastic practices recorded in his life, I am most inspired by his remembrance of Scripture. He memorized the Word of God, putting it into the treasure chest of his heart. He wanted his disciples to do the same.

In his Precepts St. Pachomius teaches that as soon as his disciples hear the call to assemble for prayer, they are to leave their cells, reciting something from the Scriptures until arriving at the door of the assembly , and then do the same when returning to their cells .

In another precept he instructs the disciple who hands out sweets at the refectory door to recite Sacred Scripture from memory . (Were Pachomian nuns making caramels back then?) Since there were a couple thousand monks and nuns, the task of handing out a treat to each one would have taken a long time. How often do we have to stand and wait for something each day? Pachomius wants those moments to be put to good use by remembrance of the Word of God. 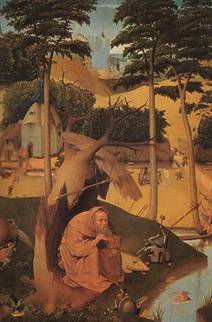 When someone comes to renounce the world, Pachomius orders the newcomer to remain outside the door for a few days and be taught the Lord’s prayer and as many psalms by heart as possible . What an excellent way for postulants to begin our life of prayer!

Finally, Pachomius lays down his minimum expectation for every member of the monastery. He commanded that “There shall be no one in the monastery who does not learn to read and does not memorize something of the Scriptures, at least the New Testament and the Psalter” .

When I realize how much he expects of monks and nuns I experience what St. Benedict described in chapter 73 of his Rule for Monasteries: “[I] blush for shame at being so slothful, so unobservant, so negligent.”

If I cannot attain such a lofty summit, at least I want to begin by walking through the foothills, doing what I can not what I can’t. Memory is a gift. Memorization is the hard work of putting this talent to use. Remembrance is the grace filled presence of the Word of God in my heart. May our hearts be nourished by the bread of life, and by every word that comes forth from the mouth of God.