The comic strip, Peanuts, not only helps us laugh but often makes us think. In one strip Charlie Brown is stretched out flat on top of the pitcher’s mound looking up at the sky. He says to himself, “I hate it when the baseball season is over. Maybe someday I’ll be a great pitcher, and play in the World Series and be a hero.” Then Lucy comes by and shouts, “Hey, look whose out there talking to himself. What are you doing, Charlie Brown, thinking about all the times you struck out?” Then she walks away laughing. In the last box Charlie complains, “There’s a dreariness in the air that depresses me!” It is disheartening and even painful, when the ideals that motivate us, the greatest things of life and soul are scorned by indifference and laughter.

The bible has its own Charlie Browns-like the prophet Jonah sulking underneath a castor oil plant because he wanted Nineveh to be destroyed, and instead they repented. Or, like the prophet Elijah who wants to die in the desert, yet seeks shade under the thin branches of a small tree so he won’t get sunburned. But, unlike Charlie Brown, Elijah was a real hero: he defeated the prophets of Baal by calling down fire from heaven. He ended a three and a half year drought by his prayers, saving an entire nation from being forced to leave the land for more fertile soil. Then, along comes Queen Jezebel, who asks, “What are you doing to my prophets, Elijah?” Jezebel is no harmless Lucy who laughs and passes by. There’s murder in her heart. So Elijah is forced to flee the very people he saved. Like Charlie Brown, he felt a dreariness in the air that depressed him so much he wanted to die, but without getting sunburned, and not by the hand of Jezebel. The greatest things of life and soul, Elijah’s love and zeal for the one true God, were scorned by the Queen and her prophets. They had no love for Yahweh or Elijah. 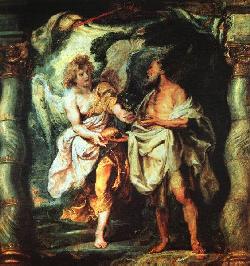 Even Jesus experienced Charlie Brown’s and Elijah’s predicament. After he multiplied the loaves and fishes, Jesus began to reveal the deeper meaning of this miracle. His body and blood would become food, nourishing us with divine love and eternal life. But, like Lucy, people reacted, saying: “Look who thinks he’s bread come down from heaven, the son of Joseph and Mary from Nazareth!” They took offense and walked away, perhaps laughing at him. Jesus experienced a dreariness in the air that was depressing. He asked his closest disciples, “Do you also want to leave?”

The story of Elijah did not end like Charlie Brown’s. When Elijah walked a day’s journey into the desert, leaving food and water behind, he really could have died out there all alone. Instead, he discovers the tender, loving care that Yahweh has for him. An angel gives him a jug of water and a cake, baked on stones made hot by the blistering sun. The angel feeds him a second time, and in the strength of that loving nourishment from God, he walks forty days and forty nights to Horeb, Mount Sinai, where God once talked with Moses face to face as a friend. God reveals himself as Elijah’s friend too, as his companion who breaks bread with him. That’s what companion means in Latin, cum + panis, with bread, someone who shares his bread with us. Yahweh showed his love to Elijah by means of life saving bread and water. Jesus shows his love for us by means of his life saving body and blood. 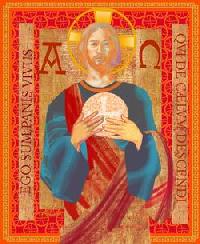 The French novelist, Victor Hugo, writing about the Reign of Terror in France during 1793, describes a scene where a destitute French noble woman and her two little girls, fleeing for their lives, are caught by a soldier of the Revolution. Bringing them to his captain, the officer realizes they are on the verge of starvation. Mercifully, he offers them a small loaf of bread. At once the young mother breaks it in half and gives one-half to each of her daughters. They quickly eat the bread while she watches with quiet contentment shining in her eyes. Surprised that the mother took nothing, the soldier asks his captain, “Is she not hungry?” The captain replies, “No, it is because she is a mother.”

The greatest act of companionship and love is to share one’s bread at the cost of one’s own life. Jesus shows us a mother’s love. At the cost of his own life he gives us the bread of his own body, and the wine of his own blood so that we can be his companions forever. Our most intimate companionship with Jesus is not a mystical union in contemplative prayer, but a sacramental union available to everyone, as easy as eating and drinking consecrated bread and wine. Without this food and drink we could spiritually die out here, separated from the greatest things of life that sustain body and soul.

Once Cardinal Hume went to Ethiopia during a famine. In a remote area he came upon a small boy who was just skin and bones, wearing nothing at all. With one hand the child held Cardinal Hume’s hand; with the other he pointed to his mouth to indicate his need for food. Then he took the Cardinal’s hand and rubbed it against his cheek. The boy was starving for food and love. These are the two fundamental needs we all have, and Christ gave us both in the Eucharist. There is no life without food, and no life worth living without love, whether we are Charlie Brown, or Elijah, or the daughters of a noble woman, or an Ethiopian boy. In the Eucharist Christ is our companion. He does not laugh at us and walk away. He nourishes us with the greatest things of body and soul.