In the course of my 51 years of life in this world, I have known one person who I might call a miracle-worker. The miracles he did were little miracles; nothing spectacular like raising someone from the dead or making the blind to see, but every once in a while, this person could pull off what appeared to me to be a genuine miracle—meaning, I could find no other way to explain what he had done, except by a divine intervention. He was a monk I knew at another monastery where I lived for 18 years, and he had the most extraordinary gift for seeing into people’s hearts; he could see somehow what was hidden deep inside people; things they themselves could not see, and he had a very simple and direct way of telling them what he saw.

A man described for me once his experience of meeting this monk for the first time. He had been talking to him in the guesthouse for a while, about a personal struggle he was going through. At one point the monk looked at him intently and said, “Charles—I believe your father may be—a homosexual.” As the man was telling me this, I felt my heart skip a beat; anticipating a possible lawsuit against the monastery. I said to the man: “He told you your father—was a homosexual?” “Yes“, the man said, “Can you imagine? I couldn’t believe he said that, and, you know—just, like, out of nowhere! At first, I was really angry, I mean, to say something like that . . and then, and then . . . I realized—he was right! It was true. 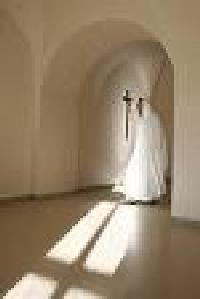 For the first time in my life, I admitted to myself that I had always known my father was a homosexual, even as a boy. I always had an intuition about it, but I wouldn’t let myself believe such a thing. For forty years I’ve been trying to deny what I knew in my heart was true, and this secret became a terrible burden for me, until I heard that monk speak—and then, father, it seemed the weight of the world had been lifted off of me. It helps me to understand so much about my father, and at last to love him; to really love him as who he is—my poor father!” The man ended his account by telling me his meeting with this monk had changed his life.

And then there were the other stories. One day, a sixteen year old girl from a neighboring parish was visiting the monastery and she happened to run into this same monk whom she had never met in her life. Approaching her holding a rose in his hand, he handed the girl the rose and said to her, calmly and deliberately, “Favored daughter, the Lord has espoused you to himself. You will be a Carmelite nun.” The girl took the flower, thanked him, and went away. A few days later, talking with her parish priest, Fr. Jorge, the girl said: “Some weird monk gave me this flower—and . . . he said that God told him I’m supposed to be a Carmelite nun!” Fr. Jorge, who was had been close to this girl’s family for years was furious; he was really, really angry at the monk’s presumption which had confused and pained this young girl, who was very dear to him. He immediately called the abbot of the monastery, and, after wondering out loud, whether this abbot was able to control his monks, succeeded in making the abbot even angrier at the monk than he was. The monk got in a lot of trouble; was obliged to apologize to the girl and her pastor and, in the end, came off looking to everyone rather foolish and full of himself.

Jesus said: “Some among you will say, ‘Lord, we did miracles in your name,’ but I will say, ‘I never knew you’.” The monk I am speaking of is a good man with a deep and abiding relationship with the Lord Jesus who he has loved and served all his life. Still—his “hit and miss” record as a miracle worker Has always intrigued me. What I have learned from this monk, who I do believe has the capacity, at least on occasion, to work genuine miracles, is that, performing miracles in Jesus’ name, and being in a faithful, intimate relationship with Jesus, are two quite different things. You can work miracles and not necessarily be bound to Jesus in an intimate loving relationship. 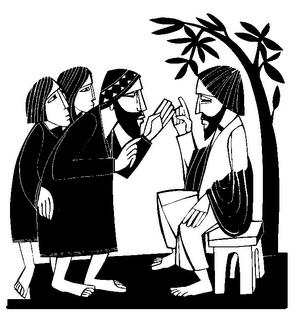 This monk had the ability to work miracles, but on his bad days, was more absorbed in self-regard than in his friendship with the Lord.

But, if working miracles in Jesus’ name does not confirm that we have a deep and authentic relationship with Jesus, then what does? Jesus says: “Hear the word I speak to you—and act on it.” But you know, and I know, people have done many foolish things; things harmful to themselves and to their neighbor; persecuted; despised—even killed their neighbor—convinced all the while they had heard the word of God and were acting on it. How do we know we are truly acting on the word of God?

The proof, it seems to me, of whether or not you truly are in an intimate relationship with Jesus is that you are like him; that you actually come to resemble him. You are truly espoused to Jesus when your life and fate in this world come to resemble Jesus’ life and the fate he suffered in the world. Are you a miracle worker? That’s nice. Someday you will make someone very happy and grateful that they knew you. Be prepared, however, that, at the judgment, Jesus himself may say: “I never knew you.” We want to be known by Jesus; to know him and know we are united to him in a lasting and intimate friendship. How can we know that we have such a bond of friendship with Jesus? Only by living as he lived; and so, in time, becoming what he was; only by suffering the fate he suffered for being who he was. Be a person for others; a person whose whole life is a gift to others; be used and despised and crucified for this generosity and at the judgment, placing before the Lord, your tired, abused, and crucified self, he will look at you; battered and weary, and seeing in you his own likeness; the light of recognition suddenly dawning in his eyes, He will say: “I know you!” And you will say: “Yes Lord—and I know you.“

There was a man who had a withered hand. His twisted fingers were locked around his thumb. His frozen hand was like a dead stump on the end of his arm, or like a weed that died under the sun’s scorching heat and contracted as it dried up. We don’t know how long this man suffered like this, but it was not from birth. At one time both his hands were good and strong. An old tradition says he had once been a stone mason. Had his hand been injured in an accident? Perhaps crushed by a falling stone? There were no emergency rooms, no doctors that could heal him. Until this Sabbath he never dreamt of being cured. But now his heart was beating rapidly, his eyes were on Jesus who had already healed so many people outside the door of Simon’s house, and who had cast out an unclean spirit from a man in this very same synagogue on another Sabbath. 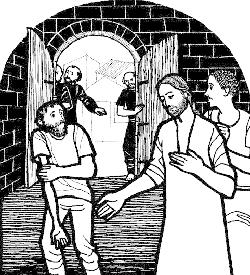 Others were also watching Jesus closely, to see whether he would again heal on the Sabbath, so that they might accuse him. And when he did exactly that, they immediately went out and held counsel how to destroy him. But first Jesus looked around at them with anger, because he was grieved at their hardness of heart. They had good hands, but their hearts were withered, dried up, without any compassion or mercy. They needed healing more than the man with the withered hand. They wanted to do harm, they wanted to kill.

Jesus is a God of mercy, he delights in healing and restoring. He cast out a devil by simply saying “Come out of him.” He cured Simon’s mother-in-law who lay sick with a fever by touching her. He cleansed a leper by saying “Be clean.” Then there was a paralytic whose sins he forgave before telling him to take up his pallet and go home. Now he shows mercy once again. Looking at the man with a withered hand, Jesus said, “Stretch out your hand.” He stretched it out before everyone’s eyes. His fingers unfolded and became soft again, the palm of his hand opened up for all to see, and he was able to wiggle and turn his hand in every direction. A gasp of awe rose up in the room. Neighbors looked at each other in wonder. People crowded around the man, touching and caressing his hand But a group of Pharisees and Herodians slipped out in anger, and began plotting how they might kill Jesus.

If Jesus looked at us, what would he see? Would he see someone here with a withered hand who will not stretch it forth to help those who are in need? Would he see anyone with withered heart, nursing a grudge or injury, turning into stone? Recently an old man died alone, separated from his relatives because he adamantly refused to forgive an insult he received at a family picnic many years ago. He wasn’t able to show mercy. Would Jesus see someone here who wants to be healed, who is afflicted but not crushed, perplexed but not giving in to despair, knocked down but trying to get up again? Jesus came for your sake. He will stretch out his hand to help you.

Perhaps no custom besides circumcision so separated the Jewish community from the Gentiles as observance of the Sabbath. Eventually the entire world accepted it as a day of freedom from toil. This immense contribution has made time each week for most people to have a special day of prayer and recreation. But Jesus added another dimension to this day of rest and prayer. Acts of mercy. To feed the hungry, shelter the homeless, visit the sick, and cloth the naked, are physical acts of mercy. Just as important are spiritual acts of mercy: to comfort the afflicted, instruct the ignorant, console the grieving, forgive injuries, bear wrongs patiently, and pray for the living and the dead. When you stretch out your hand to help those who are in need, you yourself are healed, and you become the hands and heart of Christ, who is a God of mercy.