Saturday in the Second Week of Easter 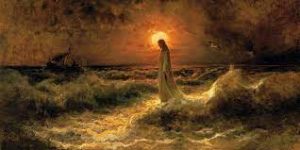 Only God and insects like mosquitos can walk on water, not humans. So, figuratively speaking, to “walk on water” is to do the humanly impossible, to be divine. If president Trump walked on water, some would say, “It’s not because he’s that good, it’s because he can’t swim.” So, when Jesus walked on the Sea of Galilee in the midst of a violent wind storm the disciples do not say, “It’s Jesus, or It’s God!” They say, “It’s a ghost,” neither human nor divine.

Now, after the Resurrection of Jesus, we revisit the day he walked on the Sea manifesting his divinity and saying to his disciples “It is I,” (ego eimi in Greek) the same name God used to identify himself to Moses on Mt. Sinai.  Just as thunder and lightning accompanied God’s manifestation to Moses and the people of Israel, so now in a violent wind storm Jesus manifests his divinity to the boys in the boat, and we confess that Jesus is Lord of land and sea, that Jesus is God and Man.  After our rowing is done, may we also immediately arrive at the shore to which we are heading.