In his letter, John again urges us to REMAIN. The Greek word for “remain”, menem, is often translated as “make a home”. He says quite simply that “this is how we know that we remain (or make a home) in Him and He (makes a home in) us is that He has given us of His spirit.” “God is love and whoever remains (or makes her home) in love makes her home in God and God makes His home in her.” “We have come to know and to believe…” Notice the intermingling of plural and singular pronouns; mostly plural. The discovery and the guidance of what we care about needs community. 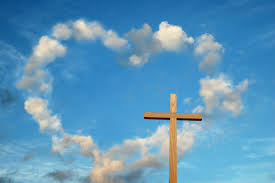 So John seems to think in spirals: he continually returns to a few same truths, each time clarifying them further. Two that are evident today are to make our home in God, and that we do this in community. Perhaps this is where Benedict got his idea to make a vow of stability, a vow to remain, part of our way of life. And from John's gospel today he may have gotten the idea of separation from the world because, as Jesus said, “they do not belong to the world any more than I belong to the world.” “The world,” as Thomas Merton has said, “is the company of the self-seeking.”

John 17 is Jesus' prayer of consecration. When He consecrates His followers He “makes them holy”. In other words, they make their home in the Father and the community of the Son's followers. That is where they learned what to believe and how to behave.

This would all be mere sentiment except that Jesus consecrates them and us in the truth; in what to believe. He does this so that the Father will protect them. His protection is sought not from the world that hated them as it hated Jesus. Protection is sought from “the evil one,” the spirit that can make them run away from home as it did with Judas. It is the evil one who is the Father of Lies. He can distort the beliefs and thus what they care about. He does this mostly through bad moods.

The passion of Christ is the model because of the greatness of the cause: love of the Father and of us. 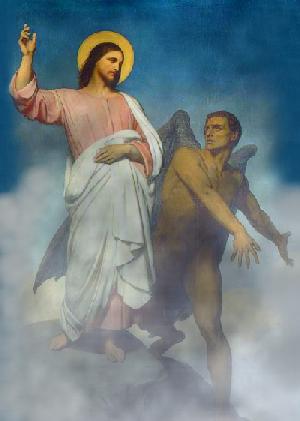 This is what vocation, marital or monastic, calls us to: to live for a cause, a love, for which we would sustain any hardship. Death is the ultimate sacrifice, but for us today it is more likely a matter of living with our sensitivities, frailties, and shortcomings. It is frequently a matter of inconveniencing ourselves for others. It is persevering on those days when life seems to chase you down and beat you up!

Two things are assumed about a brave person: that she is vulnerable and that the good she seeks is not easily achieved or maintained and so sacrifice is required. Our vulnerability is where we find that belief is often weak in guiding behavior unless belief is deeply cared about.

Benedict calls us to this in the fourth step of humility. What we are called to is not suffering in itself, but to willingness to suffer hardship in seeking or guarding some important good. In the marital and monastic vocation, one often renounces lesser goods for greater ones.

And so the Paschal Mystery has been a discovery and honing of what we care about. That is the Spirit He has given us. This brought us growth in consistency between what we believe and how we behave.

Suspense stories! Alfred Hitchcock was a master of suspense stories. In one drama a soldier has to defuse a bomb that is going to explode at midnight inside a weapons arsenal. It can only be defused without blowing up by cutting a wire during the last thirty seconds; no sooner, no later. There are eight minutes to go when the soldier drops his watch and breaks it on the concrete floor. He remembers that it takes him about four minutes to smoke a cigarette. So he lights up and when the second cigarette is almost finished and beads of sweat are forming on his forehead, he leans over and cuts the wire on the bomb. It does not explode. Greatly relieved at his success he leaves the arsenal and finding a guard he asks what time it is. The guard replies, two minutes before midnight. The bomb was a dud.

The Gospel of John is also a suspense story. The people around Jesus want to know who he is. They said, “How long will you keep us in suspense? If you are the Christ, tell us plainly.” They asked for the equivalent of dynamite, a clear statement that Jesus really is the Messiah. Or, is he just a dud, another false prophet? At first, Jesus replied indirectly: “I told you, and you do not believe. The works I do bear witness to me. You do not believe because you do belong to my sheep.” And then instead of dynamite, he gives them the equivalent of a nuclear explosion: “I and the Father are one…. He sent me, I AM.” They wanted to see if Jesus would claim to be the Messiah, bringing earthly happiness. Instead, he blows them away with a claim that makes him God, bringing eternal happiness.

All of the gospels during Easter time flow like a mighty river from the Easter Vigil, proclaiming the central mystery of the Incarnation: Jesus is God. He came from the Father and returns to the Father. He is watching over us, guarding us, calling us to ascend with him into eternal life so that his own happiness may be ours. Oh, the joy of it! But Jesus has another explosive revelation for us. It is greater than a solar flare, greater than the galactic blast of a super nova star, greater even than the big bang of creation itself. He calls us to be one with him and each other just as he and the Father are one. It is a greater act of God to raise a fallen creature to share in his own divine life than to create the entire universe. That is what Jesus has done: he has made us children of God, partakers with him of the divine nature he shares with the Father and Holy Spirit. Now, that should take our breath away! 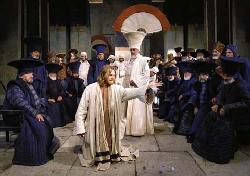 There is another suspense story in the Gospel of John. It is about a betrayer. Jesus said, “One of you will betray me. … You are not all clean. … He who ate my bread has raised his heel against me.” The apostles were dumbfounded. Who could it be? “Is it I, Lord?” The suspense was broken when Judas arrived in the Garden of Gethsemane as guide for those who arrested Jesus. Judas began well, he left everything and followed Christ, he was numbered among the apostles and was given a share in their ministry. But along the way he started taking back a bit here and a bit there. Money that was common to all he took for himself. Judas began well but ended badly. He abandoned his ministry to go to his own place. He was lost because he chose to be lost. He turned out to be a dud.

There is a third suspense story that is still being written, our own story. We have begun well, but how will we end? At our resurrection will we be like nuclear explosions, even like the big bang of creation itself, bursting forth with the very life of God inside us? Or, will we be duds overcome by darkness, swallowed up by the coldness of this world, falling headlong into a field of our own blood? How can we avoid the fall of Judas and come to share in the divinity of Christ?

Every ten years since 1634 the people of Oberammergau, Germany, present their famous Passion Play. At one performance, in the scene where Judas realizes the treachery of his betrayal of Jesus, he laments his own fall, saying, “Where can I go to hide my shame? My crime is so great! It cannot be made good by any repentance.” Then as he is about to hang himself, a child in the audience stunned everyone when she cried out, “Go to Mary!” The actor literally froze for a moment, his mouth open in a silent gasp as he realized the wisdom of her counsel. But, forced to ignore her, he proceeded with his act of self-destruction. Like the actor, the real Judas turned a deaf ear to every attempt to save him. At Gethsemane Jesus said to him: “Friend, why have you come?” And he let Judas kiss him. When the deed was done, Jesus was still very gentle with the sinful Judas. He asked with great sadness: “Judas, would you betray the Son of Man with a kiss?” But Judas gave no response. He turned a deaf ear, and he no longer walked with Mary and the apostles. He went his own way and came to a terrible end.

The story of Judas warns us that a good beginning does not assure us of a good ending. We are all living in a state of suspense, uncertain about the outcome of our lives, suspended between the eternity that preceded our births, and the eternity that will follow our deaths. We do not want to be duds. So, let us take to heart the counsel of the child who cried out, “Go to Mary.” That is what St. Bernard encourages us to do. He wrote: “When the storms of temptation burst upon you, when you see yourself driven upon the rocks of tribulation, look to the star, call upon Mary. When buffeted by the billows of pride or ambition or hatred or jealousy, look at the star, call upon Mary. Should anger or avarice or fleshy desire violently assail the frail vessel of your soul look at the star, call upon Mary. If troubled on account of the ugliness of your sins, distressed at the state of your conscience, terrified at the awful judgment to come, sinking into the bottomless gulf of sadness and about to be swallowed up by the abyss of despair, then think of Mary, call upon Mary.” If we keep close to Mary and each other, like the apostles gathered around Mary in the upper room before Pentecost, then the suspense story of our own lives will not be a dud, but an explosion of the Holy Spirit within our hearts.