Solemnity of Birth of John the Baptist

Solemnity of Birth of John the Baptist

A number of years ago, while serving as Novice Director at a monastery in Conyers, Georgia, a novice, quite new to the life, came to me in a crisis. The heart of a faithful monk is suffused with quiet joy that the world can’t touch, but there are times, especially as a young monk, that loneliness, self-doubt, and dejection can overwhelm you, and this monk was in the grips of that kind of darkness. In the midst of these interior struggles, his parents had come for a visit. Shortly after they arrived, sitting alone with their son, they had engaged him in conversation and at one point, his mother, looking at him with a searching expression, maybe already aware that something was wrong, asked him how he was doing. He hesitated a moment, and then decided he would be honest with her. Looking downcast and self-conscious he managed to say: “I’m going through a bad time. Life is hard for me now . . .” His mother, drawing near to him, placed her hand on his shoulder and said, “Son, you don’t have to stay here. If you are unhappy in this place, we can take you home with us this afternoon. There’s space in the car. You have a room at home; a hot supper waiting for you and parents who love you. Only say the word, and we’ll take you home this afternoon.” 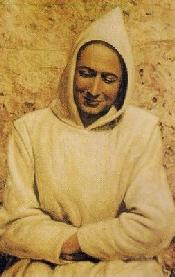 The novice was stunned. His mother’s behavior had caught him completely by surprise. His mother did nothing wrong. She loved her son and was simply giving expression to her love, though perhaps not reflecting enough about the fact that, what she was offering her son at that moment, was an escape route from God. Her words threw the novice into a truly terrible interior struggle. He managed to mumble something to her in response about wanting to give it a little more time and then changed the subject. It took the two of us a few weeks to work through the pain and confusion awakened in the novice by that moment with his mother. In the end he decided to stay and is today a monk in solemn vows, his life a sacrifice of pleasing fragrance to the Lord. It is sobering, in light of the fact that he actually persevered, to reflect that at that decisive moment with his mother, he might have actually lost his vocation.

The incident gave me a new insight into Jesus’ teaching that, if you are to be his follower, you must “hate” your mother. Now, most of us, at one time or another, may have experienced a fleeting feeling of hate for our mother—this can happen. Feelings come and go, and are not, in themselves, morally good or bad. Decisions are what matter, and certainly, as the fourth of the ten commandments makes clear, no Christian is justified in making a decision to hate his mother. And yet, as my novice learned, a moment can arrive, and it may be the very moment your mother is drawing near to you and showering you with her maternal love; at the very moment she is expressing to you her sincere love, that you might have to plant your hand in the middle of her face and apply a firm pressure, just enough pressure to establish a distance; a space that will accommodate the exercise of that freedom which is your birthright, and which comes from no earthly parent, But from your Father in heaven. 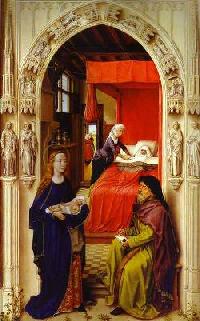 In the story related in the gospel for this Feast of St. John the Baptist, God is doing something new. A child has been born who is going to issue in a new chapter of the history of the human race. This child will be the precursor of the Savior of the world. His relatives and neighbors rejoice at the child’s birth. Their joy is sincere, but they lack any real apprehension of what God is doing in their midst and so are quite surprised that he is to be named “John“. He cannot be named John. Why? Because no one in the family is named John and, according to family custom, to name a child thus is—well . . . it’s just not done.

“Family customs“, in this case, might be thought of as all those ways in which you and I reduce the world to a size where we can feel masters of it. We do love our “customs“; our familiar ways of thinking; our tried and true ways of coping with the manifest unpredictability of life. Most of us live, not in the world God made, but in a tiny world that we ourselves have made, which is comfortable enough until the day it all falls down on our head, and it will fall because, the truth is, at every moment, God is doing something new. You dig in your heels; you can pretend you don’t see what’s coming; you can raise your fist in the air and protest to God, but the truth remains, God’s imagination is not, and never was, constrained by human expectations. In the end, all our resistance, denial, and protest in the face of change that we can’t control or comprehend, is met with a voice very like the voice of Zechariah in today’s gospel, who being consulted regarding this outrage; this proposal to name his son “John“, takes out a writing tablet and writes, for us and for all the world to read: “The boy’s name—is John.”