The Birth of John the Baptist

Birth of John the Baptist

Whether or not we consciously elude to it a tension that accompanies us through life is the tension between our desire for what is new and our need for what is familiar. If life becomes too familiar, boredom sets in and we go about our routines with little or no enthusiasm. If life becomes too unpredictable, confusion and disorientation get the upper hand. We may like surprises, but we want them within the limits of our conventional expectations. If this is true for our day to day activities, what about when God breaks into our lives? God is not limited by our expectations, and salvation history witnesses time and again that God’s ways are unpredictable and his action cannot be predicted from any set of historical circumstances no matter how ingenious we might think ourselves to be.

From the beginning of his life to the end John the Baptist is a living witness to God’s unconventional and unpredictable ways of acting. Elizabeth was beyond the age of childbearing when he was conceived. Her relatives and neighbors rejoiced at God’s intervention on her behalf, but they had very definite ideas about how things should go after that. Religious convention prescribed how the rite of circumcision and naming were to proceed. But God was preparing to do something new.  He and not social convention had given John his name.John was to be the forerunner of God’s Messiah and would announce his coming. Yet John’s preparation was to live in the wilderness. He did point out God’s Messiah, but this too was in the wilderness not in the centers of power and decision making. John had his expectations too and after his preaching in preparation for the Messiah’s coming had earned him imprisonment, he wondered if Jesus was the Messiah he had expected and prepared for. 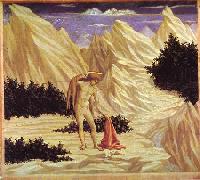 Finally Herodias’ manipulation of a fickle king brought him to an inglorious death. Viewed from a conventional perspective one might well conclude that John had labored in vain and uselessly spent his strength. But the judgment on John’s life was not with either kings or the crowds. The Son of God himself proclaimed that among human beings no one had arisen greater than John the Baptist.

What does John say to you and me? Each of us is called to be a light to the nations and a herald of God’s salvation, implausible as that may strike us. However, our effectiveness as servants of God’s kingdom depends on our willingness to follow the Holy Spirit’s direction not on our calculations and predictions. Do our expectations prevent us from recognizing the Holy Spirit’s presence and direction in our lives? As we reflect on John the Baptist’s life and mission let us ask the Holy Spirit to enlighten our minds and hearts so that we may recognize our life and mission reflected in John’s.