The Feast of the Chair of Peter

Feast of the Chair of Peter 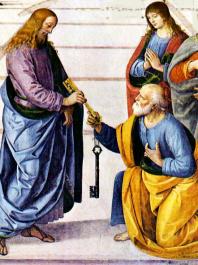 Someone was asked by a relative: “What was your father like?” “It was,” came the reply, “like living with the Rock of Gibraltar lodged in the front room. There was no getting around him.” There are at least three characteristics of a rock. It is a solid mass. It is stationary. And the elements of time and weather have little effect on its surface. It is something you can depend on to be there and stay there. At one time, a rock could serve as a land marker where there was a question of where one’s property began or ended.

In the Gospel today, Jesus makes a remarkable statement. “And I tell you, you are Peter, and on this rock I will build my Church.” Formerly, he was Simon, which means reed. Now he becomes Peter (the Latin form is petra), which means rock. No longer bending like a reed, but solidified as a rock should be, — for the continuance of the community of believers who would regard Jesus as their Savior, King and God. Jesus has left a visible and constant reminder that he is with his Church, and that Church has a leader and teacher. Church historians have come up with four Latin words that express just what that belief was and still is. “Ubi Petrus, ibi Ecclesia.” “Where Peter is, there is the Church.” Both together. Not one without the other.

The dogmatic constitution “Lumen Gentium” has indeed much to say concerning the unity of the flock of Christ in so far as it is assembled under one visible head, namely the Roman Pontiff, the successor of Peter. There are indeed a number of impressive titles that go with this office: His Holiness the Pope, Bishop of Rome and Vicar of Jesus Christ, successor of St. Peter, Prince of the Apostles, Supreme Pontiff of the Universal Church, Patriarch of the West, Primate of Italy, Archbishop and Metropolitan of the Roman Province, Servant of the Servants of God, Sovereign of the Vatican City-State.

Could any of them match: “Where Peter is, there is the Church”? The Rock is there. There is no getting around it.