The Second Sunday of Ordinary Time

As a child I used to watch a cartoon called “Mr. Magoo” which featured a little old man in a black bowler hat who wore huge spectacles, and had cute little squinty eyes, which he almost never opened. Mr. Magoo was evidently extremely near sighted; “legally blind”, we would say today, and yet he was always in remarkably good spirits; his sunny view of life never darkened by the fact that he could hardly see where he was going, and consequently, during much of the day, was in imminent danger of killing himself or someone else. In a typical scene, Mr. Magoo would be out for a drive; run the car up on to the side walk; take out a fire hydrant; release a water spout that would lift his car a hundred feet into the air; just about that time, a large steel girder carried by a crane would appear; pass right under his wheels; carry the car through the air, and, at just the point he was about to drive off the end, would deposit him at the edge of a framed building under construction where, oblivious of any danger, Magoo would drive right through the building, straddling the steel girders ten stories above street level. Several other miraculous interventions would eventually deposit him back on the street where he would continue on his way. Eventually he would arrive at his destination, quite unaware that anything unusual had happened, would let go a hearty laugh and deliver his famous line: “Oh Magoo — you’ve done it again!”

I wonder if this cartoon figure doesn’t actually point to a deep truth about our human existence. We are, it seems to me, every day, being saved from the dire consequences of dangerous choices by little divine interventions. This is especially evident with children. Watch any group of children playing; scrambling high up into trees, riding skateboards across parking lots strewn with glass; jumping head first into rivers; setting off fire-works, and you know God must be intervening continuously to prevent them from killing themselves. My sister, preparing supper one night, heard a sound on the roof, went upstairs and discovered her two boys had climbed out their bedroom window and were playing together on the roof of the house. She could only guess how long they’d been up there. A playful push; a careless step, and one of them might have spent the rest of his life in a wheelchair. Julie scolded them; gave them both a swat in the rear end. They all sat down to supper, and an hour later, forgot the incident ever happened. Our world, it seems to me, is visited by innumerable divine interventions, (without which, the average American kid would probably not survive past the age of ten), and we scarcely acknowledge these miracles ever took place.

Today’s gospel relates the wedding feast at Cana. A milestone in the Bible and in salvation history, it represents Jesus’ very first miracle. A wedding banquet is saved from ruin, and a pair of newlyweds spared embarrassment, when the Son of God intervenes and miraculously changes six jars of water into delicious wine. The groom is Mr. Magoo. Uniquely blessed, the beneficiary of Jesus’ very first miracle, there is little to suggest he and his bride are even aware that a miracle took place. When the chief steward says to him: “Wow – you saved the best wine for last!”, it’s unlikely the groom has any idea what he’s talking about. There is nothing in the text to suggest these newlyweds merited the blessing of Jesus first miracle, by living exemplary lives or by fervent prayer to God. It was Mary who interceded on their behalf, and having given the crucial instruction, “Do what ever he tells you”, it was the waiters who obeyed Jesus, supplying the six jars of water that he changed into wine. The bride and groom were celebrating their wedding without a care in the world. They obeyed no one; offered prayers to no one; did nothing; knew nothing. They didn’t know the eternal Word of God had become incarnate in a man. They had no clue the anxious murmuring coming from the kitchen marked an event that would be recounted until the end of time. The so called “Miracle of Cana” associated with their wedding day came and went; the young couple celebrated the effects of the miracle, but seem to have been unaware of the miracle itself. 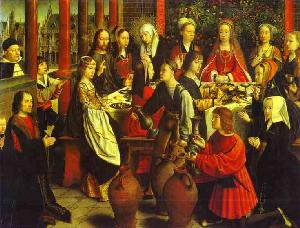 One can imagine a wedding like the one at Cana taking place in our own home town, and it’s interesting to reflect upon the fact that, if Jesus, attending a wedding in America today were to miraculously change water into wine, that would probably not change the fact that the wedding he was witnessing, had a seventy percent chance of ending in divorce. It is easier to change water into wine than to change a young man and woman into husband and wife. Few married couples can be blamed for not making an effort. People today work hard to make marriages and families work, and many succeed. Most of us are able to take the accidents of birth, economic condition, personal talents; lucky breaks and from these random pieces, put together some kind of a decent life for ourselves and those we love. We call this “getting our act together”, and yet this random putting together of pieces; this wedding of choice and chance that we call our life is a little like the wedding at Cana where the bride and groom rejoiced and were largely blind to what God was doing right under their noses. Our whole life, it seems to me, is a wedding we celebrate half blindly—like Mr. Magoo out for a drive, and which, left to itself, would certainly end in tragedy.

The good news of today’s gospel is that, though we often forget to thank God for it, we have not been left to ourselves, and the greatest miracle is the one God is working in our midst right now, of which the incident at Cana was only a sign. At Cana in Galilee, a bride and a groom, their family and friends are celebrating a wedding. Jesus, the Son of God, is celebrating with them. What the bride and groom don’t see, and what the gospel is showing to us is a glimpse of another wedding, celebrated not by a single family and their friends, but by peoples of all places and all ages: the wedding of the divine with the human. At Cana in Galilee, in a quiet ceremony witnessed by only a few of the guests, God, in the person of Jesus, is marrying humanity. It is characteristic of God to love in this hidden and bashful way. It is characteristic of human beings to benefit from God’s love and fail to even notice that God is there. God knows that about us and, as today’s gospel makes clear, He still wishes to marry us. In spite of the bride’s tendency to be oblivious; her squinty eyes and nearsightedness—the wedding is still on.

The Second Sunday of Ordinary Time 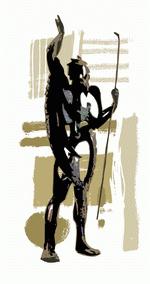 Many years ago there was a method of communication by a series of dots and dashes. By compressing a key, you could send a message to anyone who had a receiver and was within range of your transmission. The sound was audible but it was not vocal. Each letter of the alphabet was assigned a different set of signals. Each word had to be spelled out. It was slow but quite effective in its own capacity.

Happy was the day when someone received his license and his call numbers so that he could send and receive messages as an amateur radio operator. Especially when he was only fourteen or fifteen years of age. With a transmitter and a receiver you could step outside your modest assortment of friends and come in contact with others at relatively long distances. It was a sign that your local neighborhood could become more expansive.

In the first reading today it seems that Samuel knew how to receive a message but was not able to send one. He needed an instructor to inform him about procedure. Then the communication became two ways.

Of the four ends of prayer we are told that they are adoration, thanksgiving, satisfaction and petition. For a number of the faithful the prayer of petition might be one of the favorites. Our needs and problem areas seem relentlessly pressing at times and requests are duly in order to let us know of our human condition and our need of God’s mercy and help.

Some are great ones for asking but the problem might arise that we are prompt in sending a message but wonder indeed about receiving one. We were granted our call letters when we received the sacrament of Baptism. We certainly had instructors telling us all about how to transmit a request. But the problem seems to be are we able to receive a message? Especially if we were to ask the simple question of God, “Where are you staying?” And receive the startling reply, “Come and see.”