The Twenty Eighth Sunday of Ordinary Time at Mississippi Abbey

Oliver Twist and his hungry companions in an English nineteenth century workhouse dreamt of heavenly banquets. In the musical they sing: “Food, glorious food! We’re anxious to try it. Three banquets a day — Our favorite diet! Oh, food, wonderful food, marvelous food. Don’t care what it looks like. Don’t care what the cook’s like. Just thinking of growing fat our senses go reeling, one moment of knowing that full-up feeling! Food, glorious food, magical food, wonderful food, beautiful food.” Naively, young Oliver carried his empty plate to Mr. Bumble and asked, “Please, Sir, I want some more.” Mr. Bumble turned very pale and gazed in stupefied astonishment on the small rebel and said, “What!” Oliver repeated, “Please, Sir, I want some more.” There was general horror on every face. He shouted, “More? Snatch him! Catch him!” The cry went ’round: “Hold him! Scold him! Pounce him! Trounce him! Pick him up and bounce him! Never before has a boy wanted more! [He] won’t ask for more when he knows what’s in store.” Near starvation, and suffering from physical abuse, Oliver ran away to London and was inducted into the criminal gang of Fagin’s thieves.

Charles Dickens was accused of glamorizing crime in his story about Oliver. But his purpose was to present the problems of the poor, the hardships faced by the dispossessed, the castoffs of society. An old proverb says, “I’ been rich and I’ been poor, and believe me rich is better.” Dickens, however, learned from a greater storyteller that true riches are interior. The poor along the highways and byways may be richer in purity of heart and better prepared for a royal wedding banquet than those who are so preoccupied with a farm or a business that they omit the one thing necessary, preparing themselves for the wedding feast of the king’s son.

In all societies the day of a wedding celebration is a roof raiser. In Jesus’ time the celebration lasted not one but seven days. Guests came and went at their convenience all day long for a whole week of feasting. The less well-to-do might run out of wine but that would never happen at the seven day wedding banquet for a king’s son. There would be, “Food, glorious food! Just picture a great big steak—fried, roasted or stewed. What is there more handsome? Gulped, swallowed or chewed? Food! Eat right through the menu. Just loosen your belt … Food, glorious food.” Who could resist it? Who would want to? Who could not find some time during seven days of celebration for such a feast? Yet, the invited guests refused to come. Some even mistreated and killed the messengers. It’s Unreal! It’s inconceivable that a king’s feast could be turned down.

But reality is stranger than fiction. Unlimited joy in the kingdom of heaven with rich food and choice wines at an eternal wedding feast is being refused. In a few words Jesus sums up salvation history. While God’s gracious invitation is being rejected in preference for things of this world, the Oliver Twists of the highways and byways who lack the necessities of life, hear God’s call and willingly bring their needs to Him saying, “Please, Sir, I want some more,” and they receive the fullness of life forever. 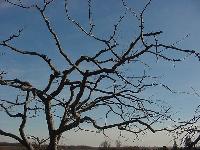 In this story about a royal wedding feast Jesus is encouraging desire for heaven and fear of hell. When hunger for the fullness of life does not motivate us to choose the kingdom of heaven, then we need a realistic fear of hell. The destruction of the citizens’ city, and the very real destruction of Jerusalem by the Romans, symbolize the interior landscape of those whose choices are self-destructive. And the man without a wedding garment came in clothes that reflected his interior, his heart. He was a hellish sight. He had days to prepare himself for the wedding feast and did not. Whether it’s days or years a time comes for final separation.

“Bind his hands and feet, and cast him into the outer darkness, where there will be wailing and gnashing of teeth.” The terrible fate of the man without a festive wedding garment belongs not to storytelling, but to reality. Six times during his ministry, Jesus warns that evil doers will weep and gnash their teeth after the final separation , and twice Jesus adds, “in a furnace of fire.”

St. Bernard describes his own fear of hell in sermon sixteen on the Song of Songs. He writes, “I dread the thought of hell … Terror unnerves me at … the crash of a world tumbling to ruin, the immense fires and uncontrollable storm … I am terrified of the fangs of the monster, the pit … where demons roar as they devour. I recoil in horror from the gnawing worm, the rolling fires, the smoke and sulfurous mist, the whirling storms, the encroaching vastness of the dark. Who will turn my head into a fountain, and my eyes into a spring of tears, that I may forestall the weeping and gnashing of teeth, the unyielding shackles on hands and feet, the heavy bonds that burn and never consume?” In another place he writes, “Let us go down into hell alive, that after death we may escape it” .

“Oh, Hell!” Little seven year old Jacinta Marto of Fatima, said it again, “Oh, Hell! How sorry I am for souls that go there.” Then she prayed as the Virgin Mary taught her, “Oh, my Jesus, forgive us our sins, save us from the fires of hell. Lead all souls to heaven, especially those who are in most need.” Today is the 85th anniversary of the last apparition at Fatima where three young children, Jacinta, Francisco, and Lucia, saw hell. Afterwards they lost all fear of sufferings on earth, and gave their lives to prayer and penance for others.

Jesus teaches that sometimes we need the desire for heaven or the fear of hell to steer us through the dangers and preoccupations of this life so that we do not self-destruct by turning away from our place at the eternal wedding feast. And what is our place? It is that of the bride being married to the king’s son. It is our own wedding we are being called to attend, and it is our love that the King’s Son most desires! This Eucharist is a foretaste of our heavenly union with Christ who is our Food, our glorious Food!