The Twenty-Eighth Sunday of Ordinary Time

As Christians, we believe that Jesus Christ came into the world, suffered, and died, out of love for all human beings. But there are passages in the gospels which suggest that, during his life on earth, there were people for whom Jesus had a particular affection. Jesus’ sacred heart went out in love to every person he met, but among these, he had his favorites; individuals who enjoyed with him a special intimacy. John, the “beloved disciple” was one, Mary Magdalene was another, Martha, Mary, and Lazarus may have been others.

It’s interesting to watch Jesus in the company of his most intimate friends, because his behavior with them can give us glimpses into his heart; into the deepest motive he had for loving human beings.

So, for example, one way Jesus consistently manifested love for his closest friends, was by taking pains to prepare them for death. Jesus came that the “sting of death” might be removed from us all, but you can see him taking special care in the case of friends like John, and Martha, and Mary, to insure that they were consoled in the face of death. 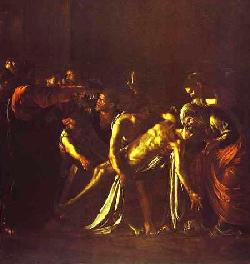 This, I think, is very revealing of who our Savior is as a person. It betrays a very particular passion awakened in Jesus by us human beings: Jesus hates the way we die. Jesus truly agonizes over the death of a human being. Watch him relating to his closest friends, and you can see this. Jesus personally dreads the event of each and every human death, as though each one were for him an unprecedented tragedy. It seems to me, Jesus’ repugnance for our human death is one of the defining features of his personality. I am also convinced that Jesus is intimately involved at every stage of our dying, and that the process affects him as painfully as it affects us. Jesus hates the way we die, and the intensity of his feeling doesn’t diminish over time. Jesus never gets used to watching people die.

More particularly, I have the impression that what especially pains Jesus is that it takes a human being so long to die. Our death is typically a rather long drawn out process, every step of which is a suffering for Jesus, as it is for us: from the moment a child considers as a completely new idea that he must someday die, to the moment a college co-ed stands beside the casket of a classmate killed in a car accident, and reflects that the real possibility of her own death is much nearer than she ever imagined; to the moment a man suffering a mid-life crisis realizes that from now on, growth toward God will mean graciously accepting the diminishment of all his powers, to the moment an aged monk accepts the reality that because of illness he will no longer attend choir with his brothers.

Jesus suffers with us, during the whole prolonged process of our dying, but he is also present to those moments when death comes to someone very suddenly as it did for our neighbor Dale Cook the Thursday before last. Jesus is agonizingly present to this moment as well; gasping as he sees the tractor begin to tip; shouting “Watch out!” to the son who is standing nearby; riding in the ambulance, imploring the emergency medics: “Help him!”; groaning at the sight of the widow receiving news that the doctors could not save her husband; and at the funeral where friends and family are doing their best to be strong, Jesus is there bodily in the person of a young boy seated on a bench bent over double sobbing.

Our death, and every moment that brings us toward it, causes Jesus to burn, and lament. Jesus hates the way we die, and so with those who were his closest friends His heart was moved to do all he could to prepare them for this ordeal.

In this morning’s gospel, Jesus meets a wealthy young man who comes to him with a very urgent request. Running up to Jesus and kneeling at his feet, the young man begs to know what he must do to inherit everlasting life. Jesus answers that he must follow faithfully God’s commandments, to which the young man replies at once that he has done this all his life. And it is with this response that the desperate urgency of the young man’s appeal becomes evident. This man does not want to die. He is asking Jesus — imploring him, how he may secure a guarantee against his own death, and it is at precisely this moment that something curious happens. The sacred author says: Jesus “looks at him with love.” We don’t often hear this said of Jesus in the gospels. Evidently, something about the heartfelt request of this beautiful young man to be spared from death moves Jesus profoundly, and at once he grants the young man his request. Looking at him with love Jesus says: “Go, sell everything you have; give the money to the poor; and follow me.”

Daunting words. We wonder why such extreme measures are required of a man who, after all, has already impressed Jesus as sincerely religious. We are a little intimidated by Jesus at this moment and may fail to see what the real motive is behind his words. Jesus’ desire is that this young man “follow him“; that he be with him in this life and in the next. If Jesus is asking of him certain sacrifices,
that is because sacrifice is the means by which his life will become one with Jesus’ life. Loving Sacrifice is how the young man is going to be intimately united to Jesus in faith. But Jesus has said: “Anyone who believes in me will never die.” and so we see it is not Jesus intention to impose anything harsh upon his young friend. He is personally extending to him an invitation to solidarity with the source of life itself, and to communion with all those saints in heaven who march in triumphal procession crying out joyfully: “Oh death, where is your sting?”

Imagine, then, what Jesus must feel when in response to this invitation, the young man’s face falls, and breaking away from that joyful procession of saints in victory to resume a lonely march toward death, he walks away with head bowed. Poor man. By his defection, he will not be spared the pain of sacrifice. Those possessions he covets now will all be lost in a death more bitter than any discipline Jesus would ever impose. He will lose everything; all that he treasures so dearly; giving it away to that loveless, malignant power that takes and gives nothing.

Brothers and sisters, sacrifice is inevitable. It seems to me, there remains for us two choices: we may embrace sacrifice graciously as Jesus will for us and the means by which we secure in Him the gift of everlasting life, or suffer the sacrifice exacted by a miserable death.

If the gospel this morning has good news for us, it is this: though that moment must inevitably come when death showing us his hideous face says: “Give up everything and follow me“, we, Jesus’ special friends, have been provided another option.

The Twenty-Eighth Sunday of Ordinary Time