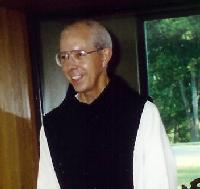 It’s early afternoon on a beautiful fall day. During a walk outside you notice black smoke coming from the roof of the candy house!  A feeling of panic sweeps over you, but when you try running for help you can only move in slow motion as if caught in a net. Suddenly a fire truck with flashing red lights and a loud siren comes roaring down the entrance road, but instead of turning right to the candy house it turns left on the road to the Abbey kitchen. In desperation you point to the candy house, but now there’s no smoke coming from the roof, instead it’s coming from the yard behind the kitchen. In a flash you practically fly there. To your bewilderment, you see the fire truck parked next to a smoking barbeque grill. The firemen, Fr. Brendan, Br. Placid, Fr. Stephen, and Fr. Xavier, are sitting at a picnic table enjoying a cookout with burgers, chips and beer. Greatly relieved, you sit down to join the unexpected picnic, and just before you bite into a juicy hamburger seasoned with onions and pickles you wake up.

The parables of Jesus are like dreams that combine familiar things in odd, sometimes unreal ways. Like the king who prepares a wedding banquet for his son and has everything ready.  But the invited guests refuse to come. It’s unbelievable!  Who would ever pass up the wedding of a king’s son?  They even murder the messengers!  The king, in a rage, goes to war and destroys their city. Yet, the juicy food prepared for the son’s wedding is still hot and there’s time to invite others to the feast.  It’s unreal unless the Storyteller is talking about the kingdom of heaven and how we respond.

In another parable all the laborers receive the same daily wage no matter how many hours they clocked. The landowner never thinks about what will happen tomorrow when he needs to hire these same people. Who’s going to begin working at the first hour when anyone can come at the eleventh hour and get the same pay? It’s unreal, unless the landowner is God and all life on earth is like a single day, and the laborers love one another.  Parables, like dreams, stretch and change what is familiar in our daily lives to reveal deeper realities, the mysteries of the kingdom of heaven. 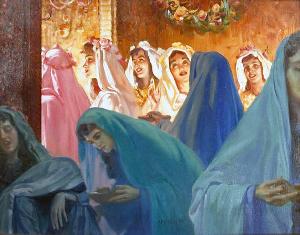 If today’s parable was about an earthly wedding, we could question the Storyteller’s facts. Wouldn’t five lamps be enough to light the way for everyone? Were the wise maidens being selfish for refusing to share their oil? Was it realistic to expect a merchant to be open after midnight? How could the bridegroom who came late reject the foolish ones for also coming late?

But this parable isn’t about an earthly wedding feast. It’s about a divine Bridegroom and a wedding feast in heaven. The Storyteller says, “Five are wise and five are foolish.”  They look alike. They’re all keeping vigil for the Bridegroom. They all become drowsy and fall asleep at the long delay. But when he arrives the foolish have no oil left in their lamps. They begin to panic. Their outer darkness reveals their inner darkness, the absence of the Spirit of God. Their empty lamps are empty hearts that do not have the love of God in them.  All ten seem the same, but really, they’re not.

Then the Storyteller reveals that a time is coming for final separation, the wise from the foolish, wheat from the weeds, sheep from the goats, houses on rock from houses on sand. The foolish stumble off in the blackness of midnight seeking an earthly remedy for their interior darkness. The night swallows them. Those who are ready enter the wedding feast and the door is closed.  It won’t be opened again.  There’s no reincarnation.  No repetitious Ground Hog Day. The separation is final. The brightly lit wedding feast goes on without the foolish virgins, and apparently without a bride.   She is never mentioned in this parable. Why is that? 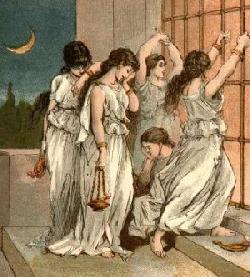 Because the Storyteller is not describing an earthly wedding but a wedding with God, the divine Bridegroom. The virgins are young girls of marriageable age.  They are all the bride. It is our wedding with God that the Storyteller is recounting. The feast is ready, the food is juicy and hot, the door is about to be closed forever on the outer darkness. The Bridegroom takes us by the hand and leads us to the banquet table. Just as you are about to taste the first delights of this divine wedding feast, someone shakes you saying, “Wake up!  It’s time for Vigils.”  The Bridegroom is still delayed, but he is coming. The Storyteller, Jesus, wants us to be ready.

Today's Gospel always makes me cringe, because I also go around in long robes and recite lengthy prayers! I want to think it doesn't apply to me, but it does.

One day a minister was preaching to criminals in a maximum security prison. After talking about the prodigal son, the good thief, and the ten commandments he asked the prisoners to reflect on their own sins and need for mercy. One hardened criminal squinted his eyes and wrinkled the brow of his forehead as he counted the commandments he had broken. Then his eyes lit up. Leaning over to the criminal next to him he whispered, “At least I never worshipped any graven images.”

Worshipping graven images is not so much the sin of tax collectors, prostitutes and criminals as it is of Scribes, Pharisees, and respected leaders. Cardinal Spellman's biographer tells the story of his many good deeds, but notes that after the election of John F. Kennedy the Cardinal was “unsettled that he was no longer the nation's most prominent Catholic.”1 Pride wants to have the first place, but that belongs to God alone.

Scribes and Pharisees obeyed every rule out of a burning devotion to God. But Jesus saw that over time their interior motivation became self-centered: wearing longer tassels, seeking places of honor, giving only from their surplus and wanting salutations in the market places.

These accusations of Jesus against the Scribes and Pharisees seem small compared to their criticisms of him: blasphemy by forgiving sins which only God can do, breaking the Sabbath, hanging out with sinners. But Jesus was what he said he was, and they were not. Their deeds were done for self-exaltation. They were worshipping graven images. Jesus is the real thing, the true Image of his Father.

Pharisees laid heavy burdens on people's shoulders. Jesus carried our sins on his shoulders, in the heavy wooden beam of the cross. They wore broader phylacteries and longer tassels. Jesus was stripped naked. They took places of honor. Jesus took the place of greatest dishonor, crucifixion. They loved salutations in the market places. Jesus exposed himself to jeering and mockery.

Jesus reproached the Scribes and Pharisees for being hypocrites, like actors in a theater. But his final words to them were tender and merciful, removing the heavy burden of sin from their shoulders and ours when he prayed, “Father, forgive them, for they know not what they do.” It isn't easy to be humbled, mistreated and last of all. But that's when the Holy Spirit can best form us into true images of Jesus, making us children of God.