Tuesday in the Fourteenth Week of Ordinary Time 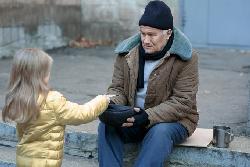 “Seeing the crowds, the heart of Jesus was moved with pity for them because they were troubled and abandoned.” Not long ago a homeless man found an envelope containing $2,400.   He took it to a police station and they were able to find the rightful owner. Hearing about this, people were so moved by this poor man’s honesty that they collected over $5,000 and gave it to him as a reward. But in his compassion for those who were down and out like himself, he gave the money to a community center serving the most impoverished, and homeless individuals. And in his humility, this homeless man asked that he not be identified by the media.1

What a great example of following the compassion and humility of Jesus!  As Mother Teresa of Calcutta once said, “Show compassion to those around you for this is where our love for each other must begin.”