Wednesday after the Epiphany

Homily for Wednesday after the Epiphany

Today’s letter from John describes what Benedict’s Rule is calling us to and directing us toward: the perfect love that casts out fear. It is reached by living in the truth. This love, John tells us, is love that we show to one another. As a love for one another, it forms our conscience in a specifically monastic way. It forms it for community.

Conscience is a voice in our inner-most core. It makes us think about things that matter. Our way of life forms us to hear it. St. Benedict begins his Rule of Life by telling us to listen to the voice. When we hear it, he says, do not harden your hearts.

Benedict’s Rule testifies to his belief that a conscience formed for public life is more likely to be suited to private life. That is what John is telling us today. A monastic conscience is formed primarily by listening to the voice of membership. It is not the individual conscience Benedict seeks to form, but that of a member; of a monk stable in his community and faithful to it’s way of life. To do this he would have to identify with the community. Communities form around a shared object of affection. According to Benedict, sharing that object (“truly seeking God”) is necessary for being regarded as a member. That is a principle that should override each member’s personality. If it does not, there will be no membership voice to hear. 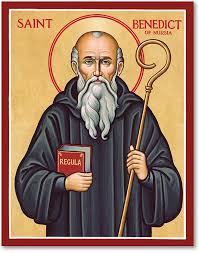 Benedict forms our conscience of membership first by giving us a way of life: a Rule we have in common that gives us a disciplined way to make decisions and choose actions. His rule makes the norms clear; a shared ethic is crucially important to being a member. To do this we must allow ourselves to become attached to the community. That includes becoming vulnerable to it, able to be hurt. We must let it affect us.

There are other voices that form our conscience for the good: voices such as that of craft, and that of sacrifice. Letting the community and its way of life affect us is the final step in forming a conscience of membership. We listen to the voice of membership. We become able to feel discomforted if we act contrary to its way of life. We feel offended if our status as member is slighted. That’s the way real members are. As Christians, when we are offended in community we make a decision to “bear the cost.” John’s letter reminds us that we bear the cost in love and so avoid hardness of heart.

And when we put this love for one another first, God remains in us. There can be no fear. That is what Benedict wants for his members.  Love and fear are ways of caring. In forming conscience, Benedict is forming what we care about. A member cares; he cares because caring is deciding that rectitude matters.

Wednesday after the Epiphany

Homily for Wednesday after the Epiphany 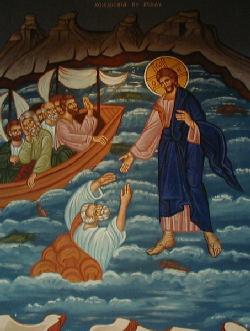 Elsewhere in this story told by St. Matthew, St. Peter cries out, “Lord, save me.” His cry for help occurs only once in the whole bible, but it goes to the heart of our human condition. We all need to be saved. When Peter bravely gets out of the boat to face the howling wind and step on top of the crashing waves, true to his name, which means “a rock,” he begins to sink like a stone. At this moment Peter doesn’t have to ask the Lord how to pray. He instinctively cries out: “Lord, save me.” There are a thousand ways to pray for help. In the Our Father we say, “Deliver us from evil.” In the Hail Mary we ask our Lady to “pray for us sinners.” At Mass we repeat the litany, “Lord, have mercy, Christ have mercy.” In our private prayers we might say with the publican: “Lord, be merciful to me, a sinner.”  But, Peter’s prayer includes them all: “Lord, save me.” It helped him.  May it help us, too.