Wednesday in the Third Week of Ordinary Time

Time magazine is reporting a new sociological trend in America which they call “dis-intermediation”. Dis-intermediation means Americans are more and more dispensing with the middle man and are securing what they want through direct contact with the person providing the product or service—and in the process cutting out the middle man. One interesting example of dis-intermediation is the rise of Donald Trump as a serious candidate for the presidency. You would think a Republican candidate for president would want and need the endorsement of the GOP party leadership, and watching Donald Trump every day spurning and ridiculing the party leadership, you might conclude it is Trump who has dispensed with this “middle-man” of the political hierarchy but it is actually American voters who have dispensed with the GOP as an obsolete middle man between them and a man they want to see in the White House. Finally, even the news media itself, who one would think is THE absolutely indispensable middle man between any candidate and the voting public, even the media is ridiculed by Trump and ignored by his supporters as Trump is featured in one unflattering story after another—none of which seems to have any effect on his popularity. Some journalists are raising an alarm about this process of dis-intermediation by which a lone individual can attract a huge following without any of the checks and balances characteristic traditional political institutions. 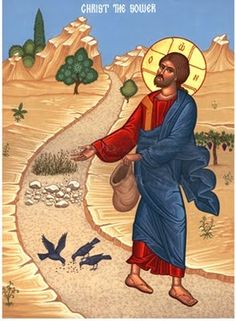 But Jesus our Lord, it must be said, was a person whose growing influence and popularity seems to have bypassed the mediation of the religious institutions and leadership of his day. From the very beginning, the really distinctive thing about Jesus' message was its referral of his audience directly to the person of Jesus himself. Actually, in the parables, like that of the Sower, featured in today's gospel, we hear Jesus preaching the Kingdom of God but in a manner that makes clear he is himself replacing and is in his very person realizing the whole reality of the Kingdom of God. After his resurrection the truth will be crystal clear: Jesus—Jesus himself—is the Kingdom of God. But this means, that understanding the parables is only possible by virtue of a personal encounter, coming to know, and faithful following of Jesus as a beloved person. This might explain why we hear a trace of sadness and hurt in Jesus' voice when he says to the twelve: “Do you not understand this parable. But then how will you understand any of the parables.” The parables are Jesus; the parables are Jesus telling the story of himself; revealing himself as the Kingdom of God to his dearest friends. Do you hear him describing a “seed” that falls and dies—but that would be Jesus himself. Jesus will lay down his life so that, rising to new life, a door may be opened for us to enter that new life. Let us now proceed to the Eucharist mindful of the fact that receiving the sacrament of Jesus' body and blood with fervent faith, we are, in a very real sense, gaining entrance to the very Kingdom of God Jesus preached and incarnates in his person.