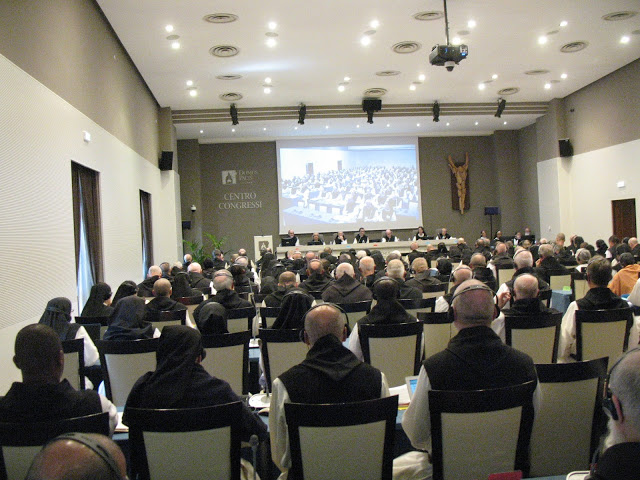 The General Chapter of the Order of Cistercians of the Strict Observance opened today in Assisi, Italy. All of the abbots and abbesses of our Order, including our own Fr. Mark, will meet for the next three weeks for “the salvation of their own souls and of those committed to them.” This is a regular, every three years, meeting of the Order’s superiors to foster communion of spirit and vision within the Order and to address the issues pressing upon us at this time.

from The Charter of Charity

Chapter Seven: Of the General Chapter of Abbots at Cîteaux

Let all the abbots of these churches come to the New Monastery once a year on the day they decide among themselves, and there let them treat of the salvation of their own souls; if something is to be emended or added to in the observance of the Holy Rule or of the Order, let them so ordain it, and let them reestablish among themselves the good of peace and charity.

But if any abbot proves to have been less zealous for the Rule or too intent on things secular, or habitually prone to any vice, let him there be charitably proclaimed. Let the one proclaimed prostrate and fulfil the penance assigned him for the fault. But only abbots are to make this proclamation.

But should any church fall into intolerable poverty, let the abbot of that monastery take care to make this matter known before the whole chapter. Then let the abbots, one and all, enkindled by the most intense fire of charity, hasten to relieve the penury of that church, according to their resources, from the goods bestowed on them by God.

from Constitutions and Statutes of the Monks and Nuns of the Cistercian Order of the Strict Observance:

1 – At fixed times all the abbots and abbesses come together. They discuss there the salvation of their own souls and of those committed to them. They take measures regarding the observance of the Holy Rule and of the Order where there is something that needs to be corrected or added. They foster anew among themselves the benefit of peace and charity. They devote themselves to maintaining the patrimony of the Order and safeguarding and increasing its unity.

2 – The supreme authority of the Order is exercised by all the superiors meeting as a General Chapter, according to their proper Constitutions. The General Chapter is competent to legislate for the monks and nuns and to be responsible for the application of these laws.

C.78: Those Taking Part in the General Chapter

The Abbot General, the superiors of autonomous monasteries and the councillors of the Abbot General have the obligation of participating in the General Chapter with the right to vote. … The Chapter can invite other members of the Order and even give them voting rights.

C.79: The Competence of the General Chapter

It is for the General Chapter to approve new foundations or their closing, to incorporate or suppress monasteries of monks, to incorporate monasteries of nuns, to petition the Holy See for their suppression, to elect the Abbot General … and to accept his resignation. It is also for the General Chapter … according to the Constitutions, to elect officials of the Order determined by law, to watch over the manner in which they exercise their office, to accept their resignations and if necessary to depose them, and to accept the resignations of abbots and abesses or to depose the abbots.