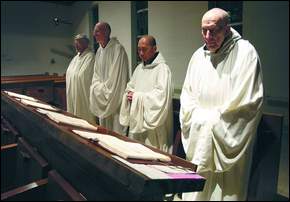 While transfer of a monk from one monastery to an other happens from time to time, the transfer of a monastery from one religious institute to another is exceedingly rare – and will take place on August 15 with Abbot Mark and Fr. Stephen in attendance.  Assumption Abbey, in Ava Missouri, is a community of Trappist monks founded by New Melleray Abbey in 1950  This means Assumption Abbey is our “daughter house”, and the abbot of New Melleray is the “Father Immediate” responsible for pastoral care of the community as abbot of the founding house.  For many years, the community at Ava has had difficulty attracting and retaining new candidates with the result that, there are at present only about five elderly Trappist monks still residing there.  Several years ago, in a most unusual development, several Cisterican monks from a monastery in Vietnam approached the community and proposed sending a few from their community to live with the Trappists.  In Vietnamese culture there is great care and reverence for one’s elders and the Ava Trappists were charmed by the arrival of these able-bodied brothers who were pleased to support and provided for them in their later years.  Discussions ensued about the possibility of transferring the monastery to the “Order of Cistercians”, (Or Cistercians of the Common Observance), at a point in time agreed upon by all parties involved.  Monasteries in Vietnam are presently receiving many candidates and this community wished to make a new foundation in the U.S.  Their offer to come and live at Ava permits the old monks there to finish their days in the place and on the site where they took their monastic vows many years ago.  They were very grateful for this arrangement which they prefer to transferring to another monastery.  So, on August 15, in a formal ceremony, Assumption Abbey will be transferred from the “Order of Cistercians of the Strict Observance”, (Trappists), to the “Order of Cistercians”.  Abbot Mark will take part in the ceremony and Fr. Stephen as well who served as a member of the Commission of the Future overseeing the transition.  The Trappist monks will remain Trappists, but instead of hosting their Vietnamese brothers, will from now on, be themselves the guests of the Vietnamese community and true brothers in Christ.  While the monastic life-style and culture of the two institutes is very similar, it is not identical.  Your prayers are appreciated for our Trappist brothers who will need to make some adjustments and also for our Vietnamese brothers who face all the challenges of making a new foundation.  Finally, you might offer a prayer that these men from Vietnam are able to live in peace with their neighbors who were born and raised in the Ozarks!  And in all things may God be glorified.